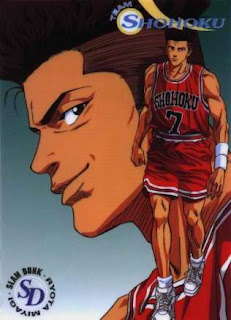 Japanese anime do very well. Feel good. I like it very much.Ryota Miyagi a.k.a Ligthning or Shorty was the starting point guard of the Shohoku Team where Hanamichi Sakuragi playing. He’s only second year, 5’6 inch in height,. He always claim himself that he is the number one point guard in the prefecture and was greatly in love with ayako who is the manager of their them.nba jerseys paypal

Talking about his personalities, Miyagi was a very rude guy and only cares for his love ayako. He easily get involved in trouble or in a fist fight. It was proven when he was hospitalized once because he got a fight in group of Hisashi Mitsui who later became a member of the team. He also get involved in a fist fight to the main character of the series Hanamichi Sakuragi who was also a troublesome guy because miyagi mistakenly thought that Sakuragi was Ayako’s new boyfriend but later he found out that it’s not true.
Posted by I think you at 12:09 AM